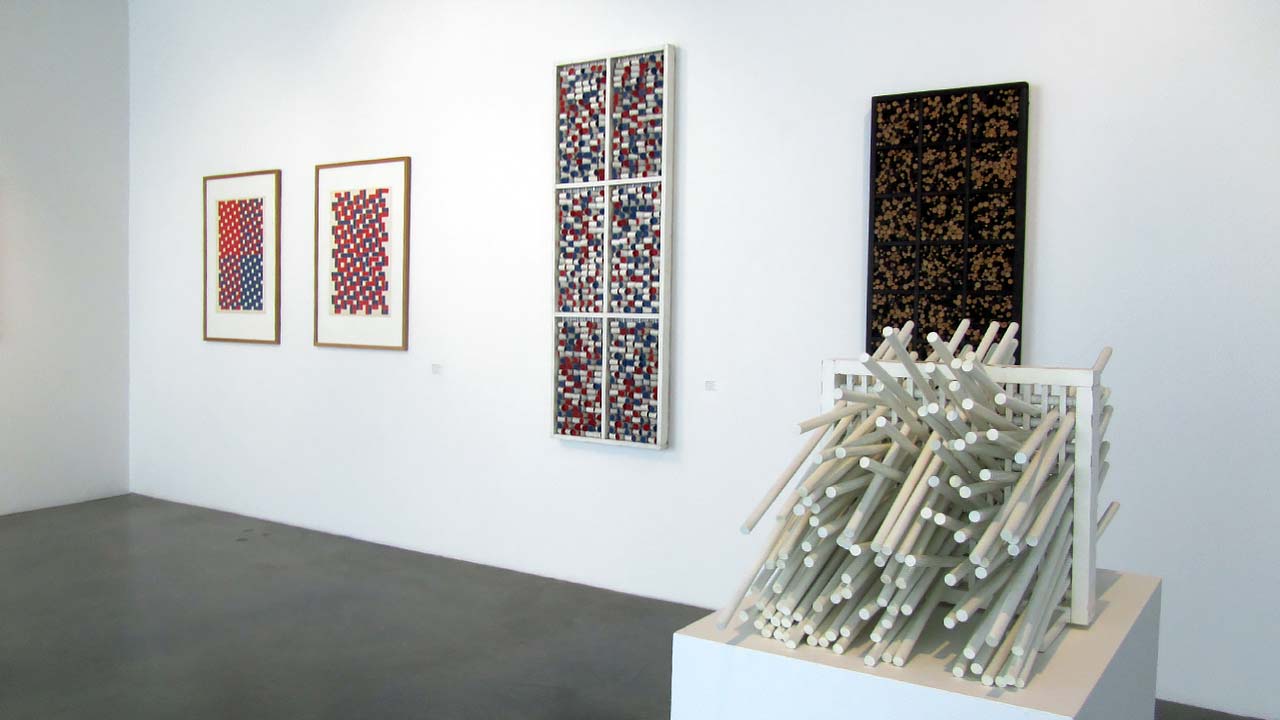 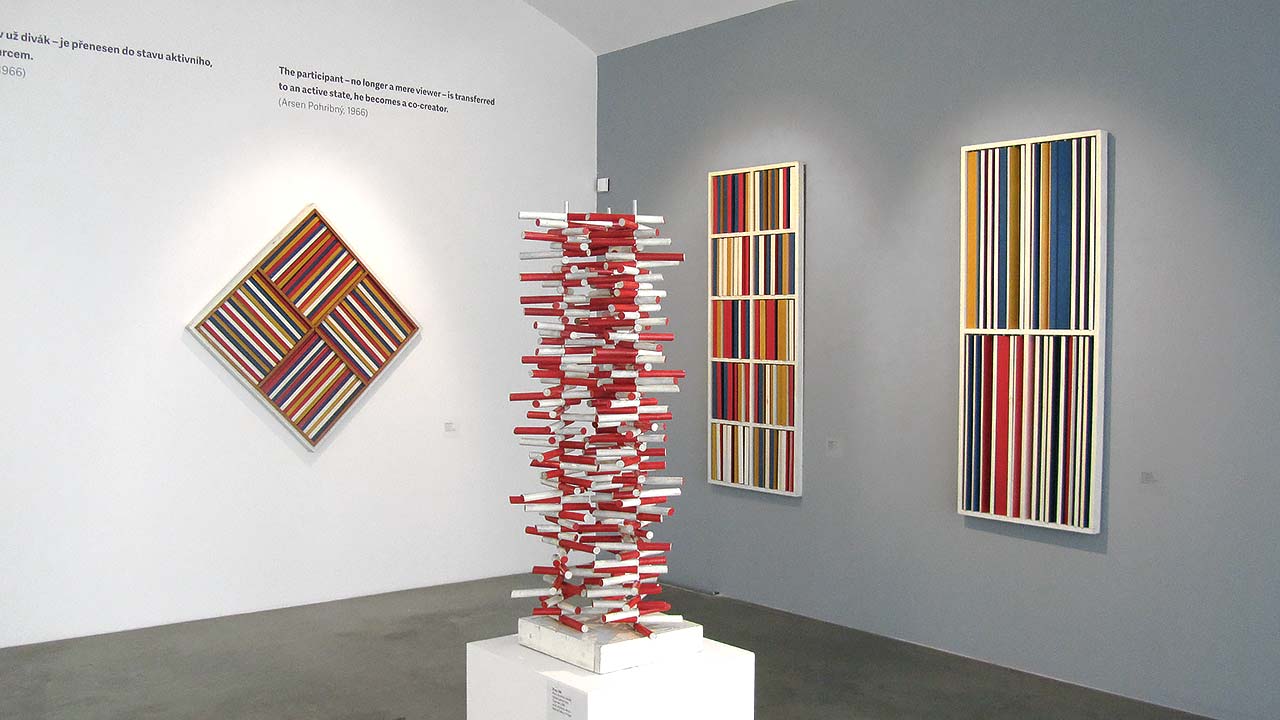 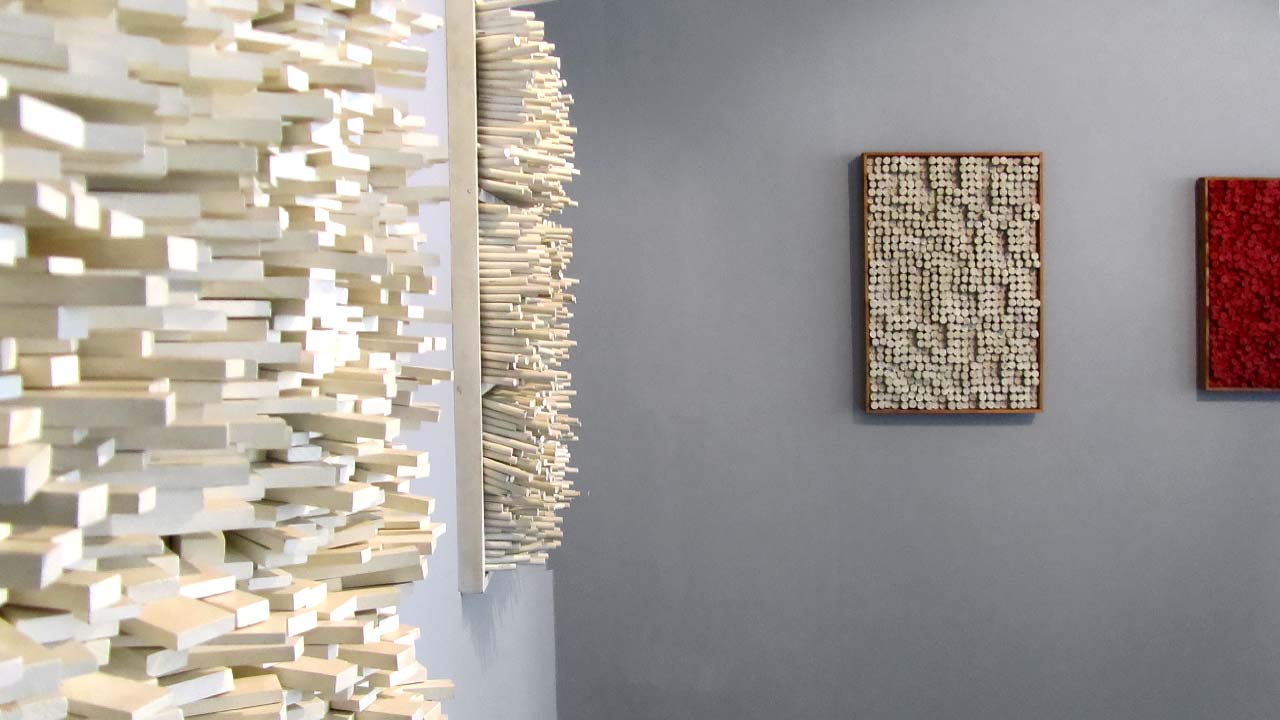 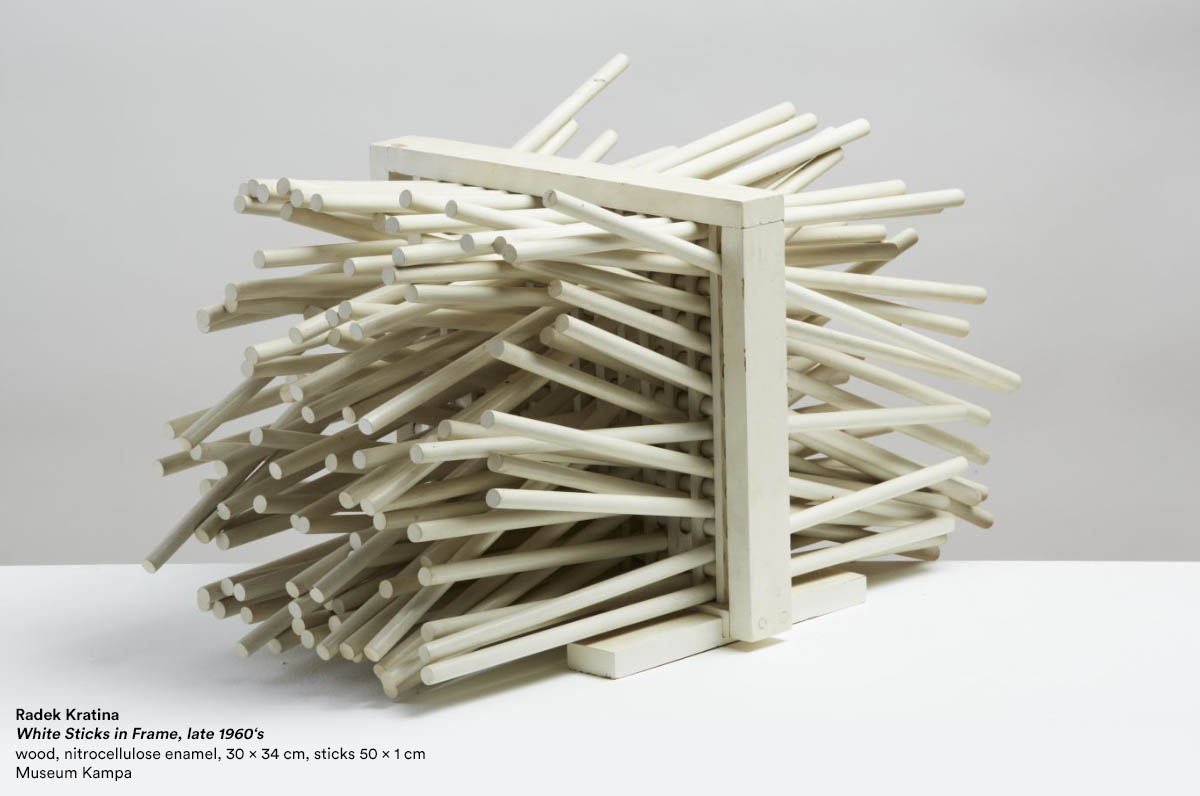 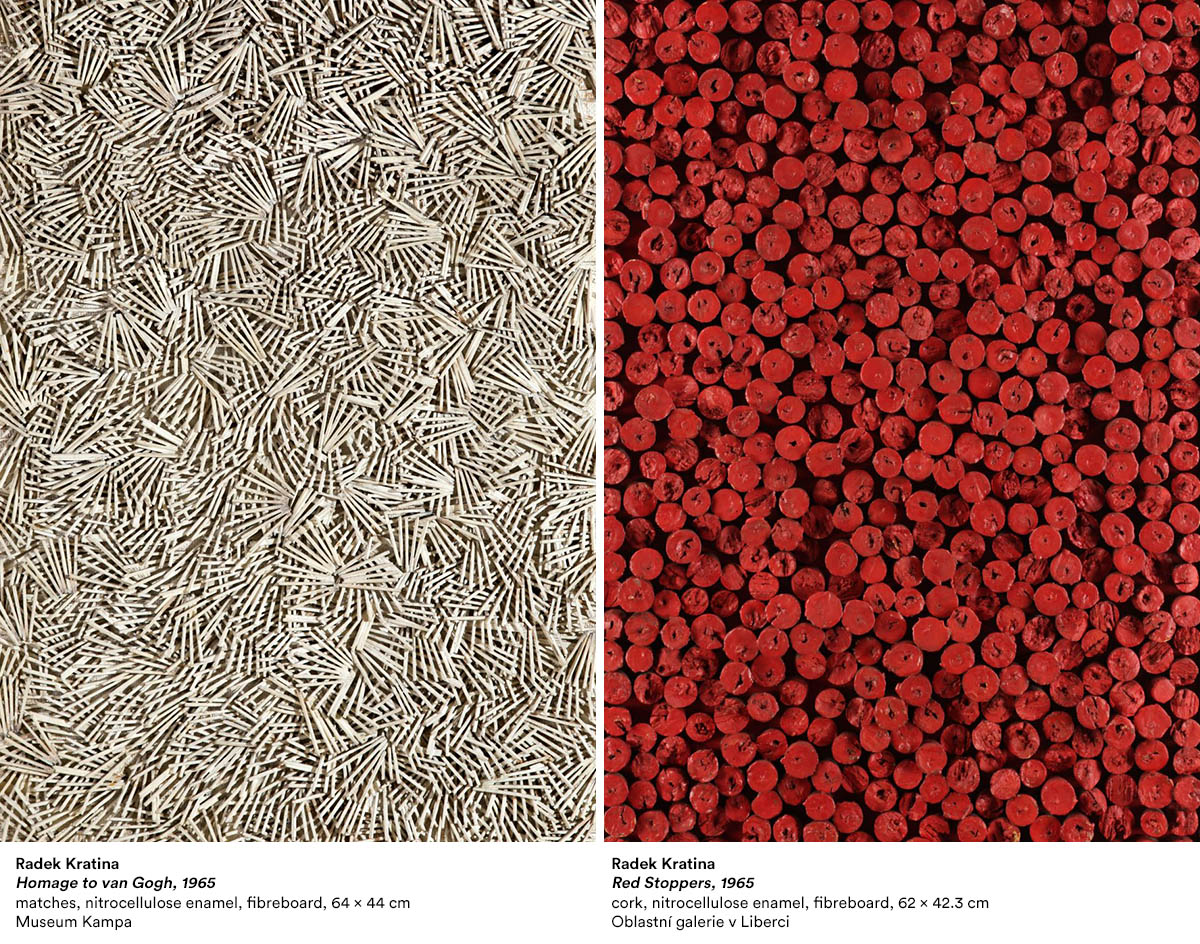 The work of the sculptor and graphic artist Radek Kratina (1928–1999) is one of the key phenomena of rationally oriented postwar art, which was endorsed in Czechoslovakia of the sixties, especially in connection with the emergence of the group Křižovatka (Crossroads) (1963), with the exhibition titled Nová citlivost (New Sensitivity) (1968), and the establishment of the internationally active Klub konkrétistů (Concretist Club) (1967). The representatives of the movement, which was labeled by the term neo-constructivist tendencies, continued in the interwar Avant-garde heritage, specifically the domestic group Devětsil, German Bauhaus, or the Dutch movement De Stijl. Hand in hand with the new approach to life and its positive program in the field of research, technology and science, the artists with a neo-constructivist focus, who explored the possibilities of minimalism, kinetism and geometry, were driven by an internal effort to create objective process of creation.

Radek Kratina entered the artistic scene in the mid-fifties with his textile designs (for example the panneau for the Czechoslovak pavilion at Expo 58), wooden toys with moving parts, and paper cubes from children’s cutouts. These examples of applied art were important precursors of his art, which Kratina developed since 1963 throughout the rest of his life. They provided him the experience with the principles of serial row of elements on plane or shapes in space, rules of order and its disruption, and finally with the possibilities of alternation of an original system, yet they were still observed in terms of a figural language.

Since 1963, Kratina filled his atelier with material structures, which were based on an interest in the application of the principle of order, determinateness and transformation, intent and coincidence, and a concern for the possibilities of a selected method, which may be freely fulfilled, unlike the then current Art Informel that was erupting from existential dramas. These early structures were created by dripping colour or adding drops of paint thinners into a coloured plane, or, conversely, by fixing materials to a foundation board. Examples include fine reliefs of alphabet pasta that create structures, from amorphous clusters to a system of rasters of periodic fields or rows (Písmenková tabule s černým oválem, 1966 (Letter Board with Black Oval, 1966); Písmenkový reliéf, 1965) (Letter Relief, 1965)). On the other hand, the reliefs from cork stoppers are of a monumental nature (Zátky, 1964 (Cork Stoppers, 1964); Červené zátky, 1965 (Red Cork Stoppers, 1965)) and here Kratina worked with the original shape of a circle, its serial line-up within a plane, but also with plasticity of cylindrical forms of various lengths that create a dialogue of different spatial planes, which form a differentiated volatile structure. Specific area of Kratina’s material structures is represented by his sculptures from matches, which anticipate creation of wooden variables. Next to planar compositions (Pocta van Goghovi, 1965 (Tribute to Van Gogh, 1965); Stříbrná struktura, 1965(Silver Structure, 1965)), they presented a solution with matches assembled in and completely filling a free-standing wooden frame (Zápalková struktura – nultý variabil, 1964 (Match Structure – Zero Variable, 1964)). The viewer may model the match structure by using just the pressure of his fingers from the “obverse” and “reverse” sides, and thus for the very first time in development of Kratina’s work actively participate in a real transformation of a work of art.

Since 1965, Radek Kratina created wooden reliefs with a central theme of a variability principle. He worked with simple wooden elements, such as a bar, roller, prism, or cube, which were organized in specific compositions by being anchored to a rotating axis (Válečky na ose, 1967 (Rollers on Axis, 1967)), or being inserted in a simple construction (Bílé tyčinky v rámečku, 2. pol. 60. let (White Sticks in a Frame, late 1960’s)) or frame (Kosočtverec s průčelně položenými hranoly, 1967 (Rhombus with Frontally Placed Prisms, 1967)). He created his variables with the knowledge of an upcoming transformation, whether by shift, turn, pull, or change of angle. The artist had left the extent of the viewer’s participation up to his inventiveness, momentary state of mind, and intuition. Hence the viewer may change just a single element, or conversely transform a whole group of elements. But both cases result in a reformation of the whole constitution of the work. Kratina emphasized this potential of transformation of internal relationship situations by his choice of colours using simple industrial colours, such as red, blue, and yellow, often in contrast with white (Deset polí čtyřbarevných hranolů, 1966 (Ten Fields of Four Prisms, 1966); Vodorovné tyčinky, (1965 Horizontal Bars, 1965)). In addition, he applied colour very logically, almost in an engineered fashion – for example, he designated a half cylinder to colour, or differentiated sides of a prism by colour – thusly, Kratina supported the inner order of his works and presented us with a subconscious clue for potential interaction.

After 1970, Kratina started to build his variables with metal instead of wood, and used a workshop instead of his own workshop. Kratina concepted his metal variables as an assembly of elements inserted into the frame (Vertical Grid with Rotating Discs, 1984), or presented the possibility of opening or branching the rotating parts into space (Sklopné rámečky, 1979 (Folding Frames, 1979)) or piling elements into vertical bars ((Arsenál bílých a černých válečků, 1983 (Arsenal of black and white rollers, 1983); Tyčová formace, 1983 (Stick Formation, 1983)). The material properties of metal provided him with the option of a more precise machining of individual elements and their connection by means of pivots at different angles opened a much larger field of possibilities of manipulation and transformation by the viewer.

An encounter with Radek Kratina’s works is always a challenge to begin a sensitive dialogue; an inventive game, which offers a whole array of possible strategies and interventions. We enter an open and ongoing process not as passive viewers, but as partners, who may have a taste of strength of creative energy under the direction of the artist’s intent.

The Constants and Variables exhibition in Museum Kampa, which will be repeated in extended form in Brno City Museum, is not only a reminder of artist’s approaching anniversary of what would been the artist’s 90th birthday, but more importantly, an acknowledgement of an exceptional personality, who enriched Czechoslovak post-war art by completely original and consistent art.