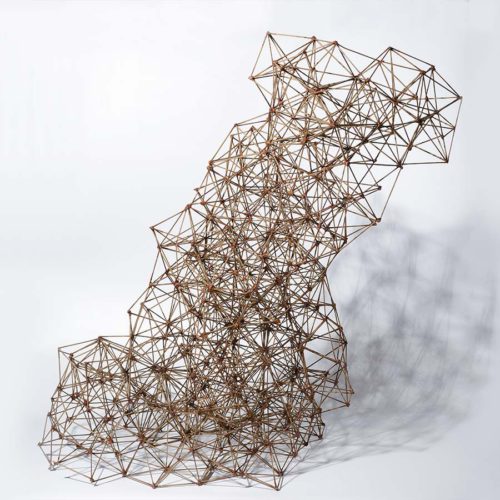 The artistic creation of František Kyncl reflects the conflict of rationalism and intuition, of order and chance, simply of modern rational thinking and postmodern uncertainty, characteristic of the second half of he 20th century. Influenced by constructivism and the German group Zero, in the 1970’s, Kyncl starts making works from skewers, later from bamboo sticks, as well as three-dimensional objects following both geometric forms such as triangle, square or circle, and organic growth into all directions. Like this, fragile objects in the form of grids, nets, and sometimes even cobwebby clusters emerge, both refracting and reflecting light which thus becomes part of those objects. Kyncl calls them the Spatial structures and he understands them as a picture of society: “When the multiply and grow wider, for me it is something like a picture of society and of how people behave to each other.” From the end of the 1980’s, he engages mainly in drawing which abandons the geometric forms, becomes more expressive and features also figurative elements. The exhibition entitled František Kyncl: Point, line, space in the Museum Kampa will present the production of the artist in its full many-sidedness.

František Kyncl is born in 1934 in Pardubice. In 1968, he leaves Czechoslovakia. From 1969, he lives in Düsseldorf where he studies at the Academy of Fine Arts. As early as during his studies, he becomes a part of the Düsseldorf art scene, pertaining to the most radical art movements of that time not only in Germany. This is how he gets acquainted with the artists Günther Uecker, Norbert Krick and Joseph Beuys. His works are exhibited in major institutions such as the Düsseldorf Kunstverein or the today legendary Hans Mayer Gallery. He dies in 2011 in Düsseldorf.