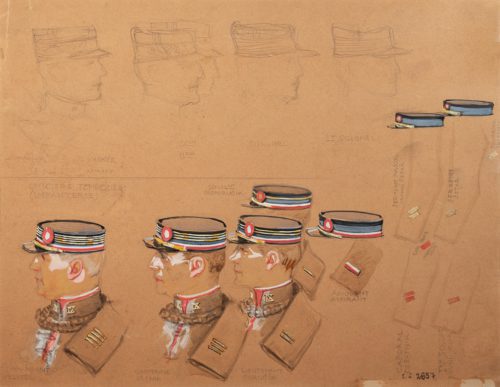 The exhibition František Kupka – Legionnaire and Patriot brings an overview of the work by the painter František Kupka (1871–1957) relating to the period of the First World War and the first years of the newly established Czechoslovakia. The exhibition presents Kupka’s works created for a variety of areas, but mainly for one purpose – to help the emergence of an independent state. The “Great War” hit the lives of all Europeans. State symbols have accompanied, throughout the millennium, all important and key events during the history of Czechs and Slovaks and their state bodies. These symbols were always closely related to the military, and therefore they were an integral part of Czechoslovakia’s military traditions and ceremonies.

They were often transformed from the original function of distinctive symbols into mass-used objects with a strong personal and emotionally coloured content expressing in brief the views, opinions and aspirations of the citizens of our nations. Seriousness and respect for state, national, and military symbols have in the past created traditions directly linked to the struggle of nations for independence, democracy and freedom. This period also affected the life of the Czech painter František Kupka, living in France. The artist, though uprooted from his homeland, immediately seized the opportunity to engage actively in its history and did not hesitate to engage in the war at the age of 43. He experienced firsthand trench warfare and later became intensely involved in the diplomatic field. As the chairman of the Czech Colony in Paris, he worked closely with representatives of our foreign resistance – Tomáš Garrigue Masaryk, Edvard Beneš and Milan Rastislav Štefánik – and with his efforts he supported the Czechoslovakian legionnaires. In September 1918, he again joined the Czechoslovakian Foreign Army in France and returned to Prague in 1919 as a proud member of the Czechoslovakian Foreign Army. The legionnaires contributed significantly to the beginning of an independent Czechoslovakia by their dedication fight.

The legionary tradition, to which the later Czechoslovakian armed forces referred, was further developed by Kupka after returning to the newly established Republic. Kupka remained in the Czechoslovakian army until 1920, but later decided to return to France.

The exhibition presents Kupka’s work for the bulletin of the Czech Colony, designs for uniforms, orders and decorations, standards and state symbols, in designs and realizations. The exhibition is accompanied by archival materials, bookpublications and period photographs.