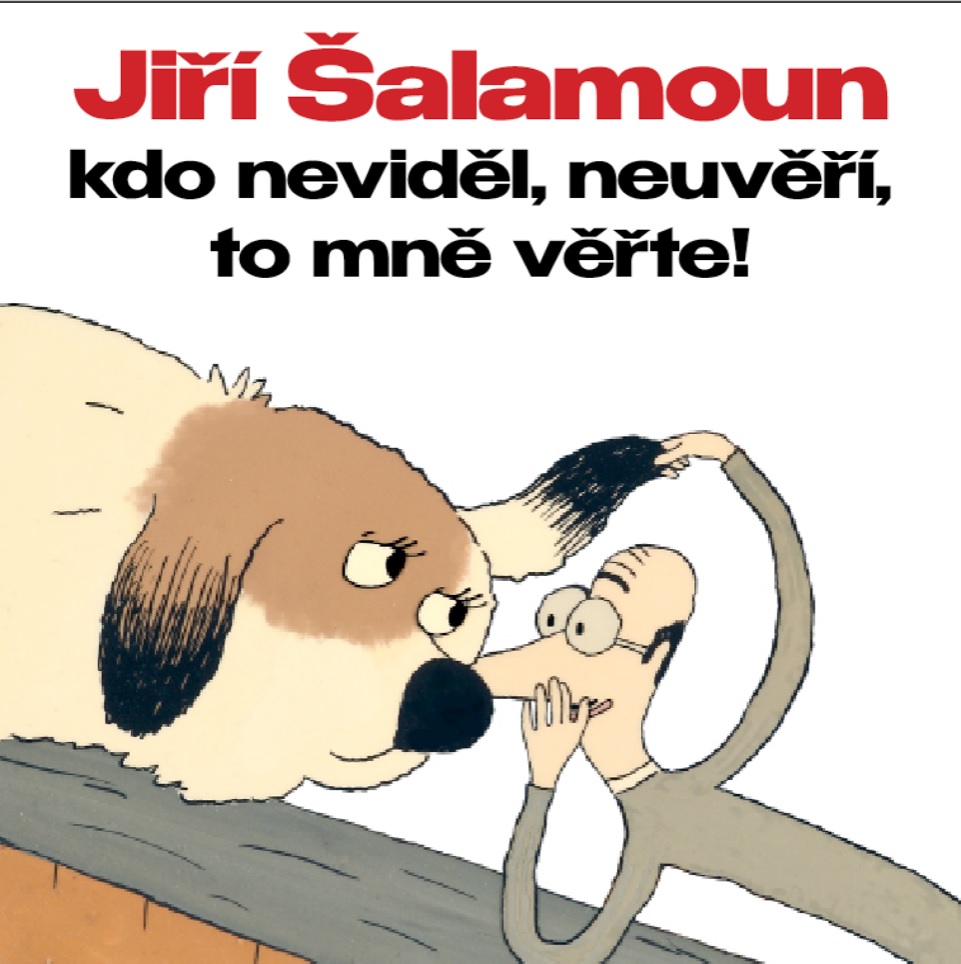 Jiří Šalamoun Not Seeing Is Not Believing, Believe Me!

Jiří Šalamoun (*1935), a living legend of book illustration and animated film, professor emeritus and long-time head of the illustration and book graphics studio at UMPRUM (Academy of Architecture, Art and Design in Prague), has become known to several generations as the author of the graphic design of the cartoon Maxipes Fík (Fig the Giant Dog). The good-natured talking dog from the TV series of bedtime stories has literally become a national hero in the last forty years and, for this reason, a substantial part of the artist’s most extensive retrospective exhibition so far at Museum Kampa is dedicated to this character.

But Jiří Šalamoun is by no means a single work artist: he was the art designer of a number of other cartoon films, created dozens of free lithographs and posters, and published two collections of poems and one collection of ‘dream records’. But firsts and foremost, he has graphically edited and illustrated more than a hundred books published not only in the Czech Republic, but also in Germany and Poland: The Last of the Mohicans by J. F. Cooper, The Posthumous Papers of the Pickwick Club by Charles Dickens, The History of a Town by M. J. Saltykov-Shchedrin, The Hobbit: Or, There and Back Again by J. R. R. Tolkien, Funeral Songs by J. J. Ryba, and The Murders in the Rue Morgue by E. A. Poe, to name but a few. Crime and horror, mystery and magic are among the artist’s favourite themes, which is reflected in his books and free lithographs, often in the form of comics.

The main ingredient in Šalamoun’s illustrations is humour – mostly a tad mischievous and subversive; they also ooze scepticism and, at the same time, insight into the trivialities of life, generous imagination and meticulous attention to detail. The history of everyday life in the 20th century is reflected in his work as in a mirror maze that comically enhances certain aspects of reality.

Šalamoun’s unmistakable, distinctive manner mixes the guileless spontaneity of children’s drawings with the naïve sentimentality of folk paintings and the cruel naturalism of broadsides. Šalamoun is an artist who is creative above average (he chooses a unique artistic language for each subject), playful (discovering new ways gives him childish joy), honest (he analyses the subject rigorously) and inventive. The art historian Josef Kroutvor described Šalamoun’s method in the following words: “[Šalamoun’s] Illustrations are born gradually; the first situational sketches come after meticulous study; the form of the illustration is constantly refined and, in the end, there is often a complete redrawing ‘in one stroke’.”

Visitors can discover the richness of Jiří Šalamoun’s artistic language and the individual stages of his creative process, from the first sketches to the resulting book or cartoon film, on the two floors of the Moderna Gallery of the Museum Kampa from July 17th to September 30th, 2021.