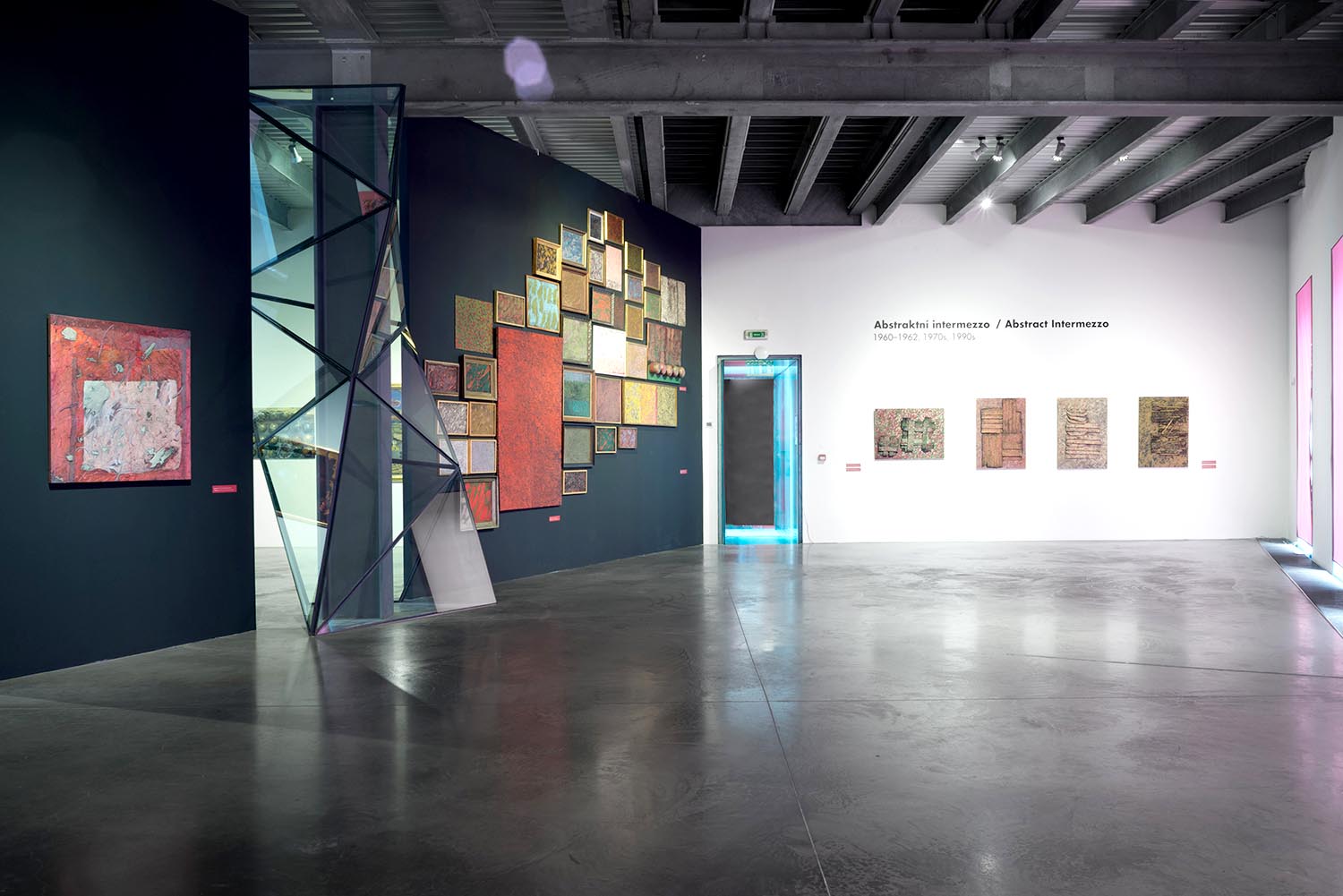 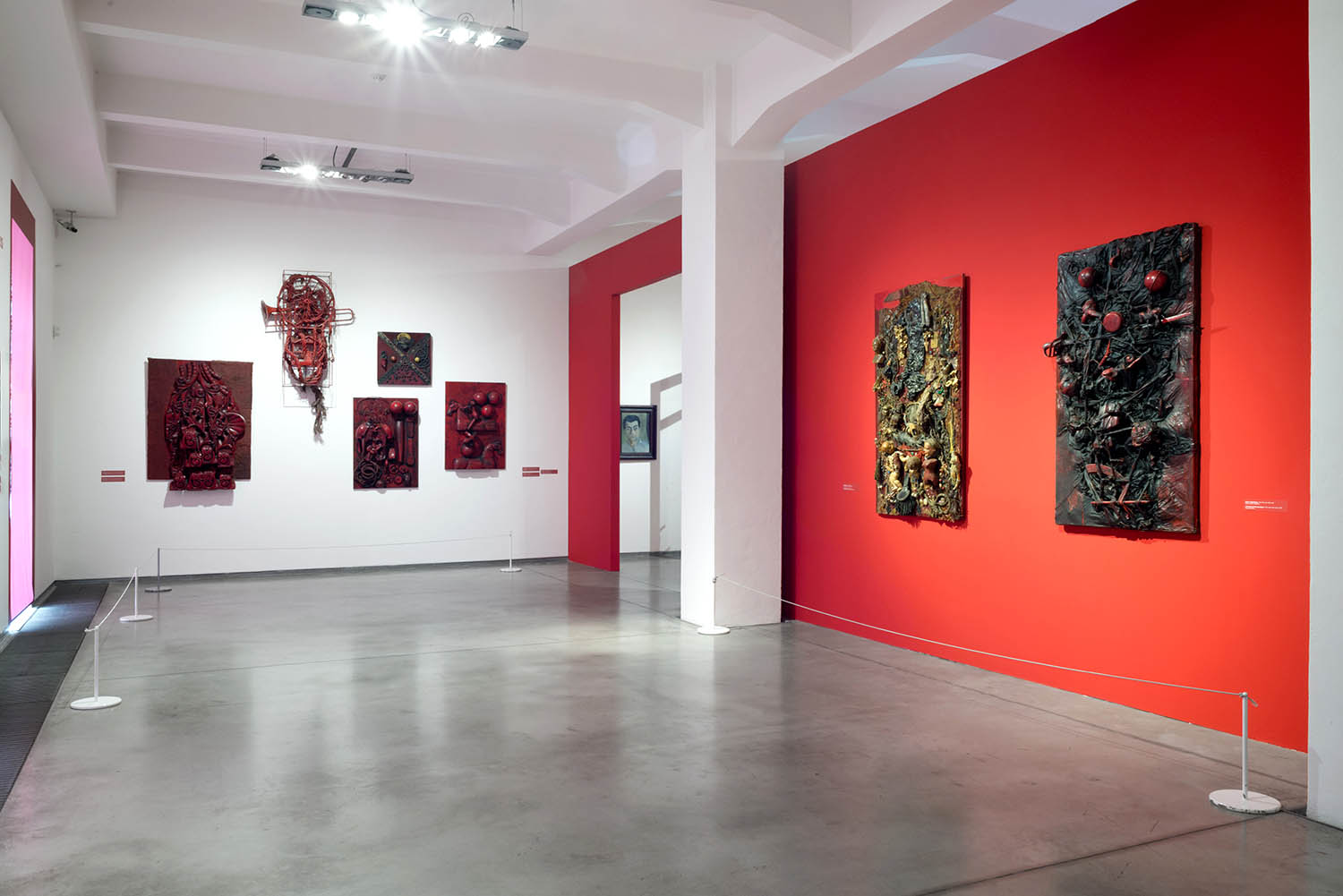 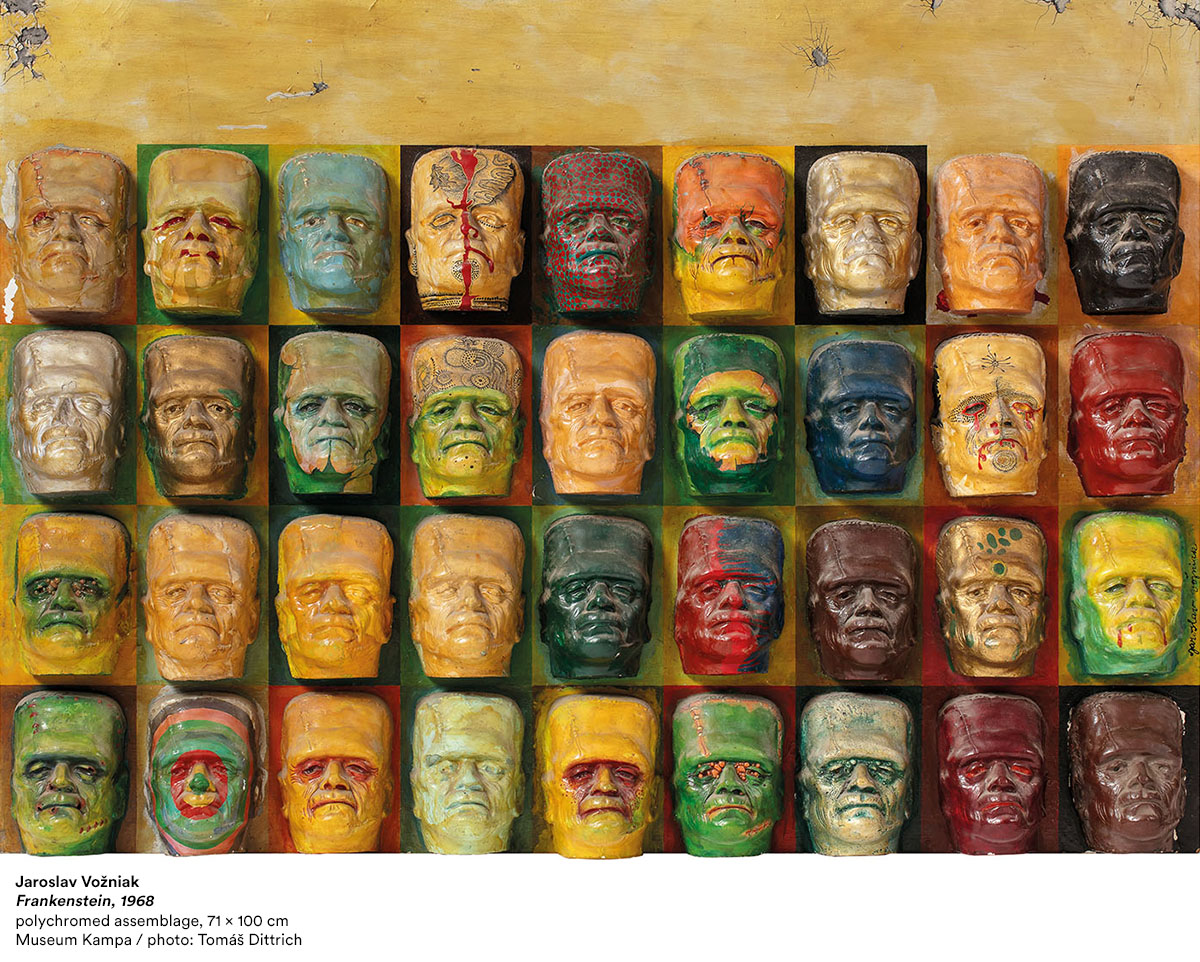 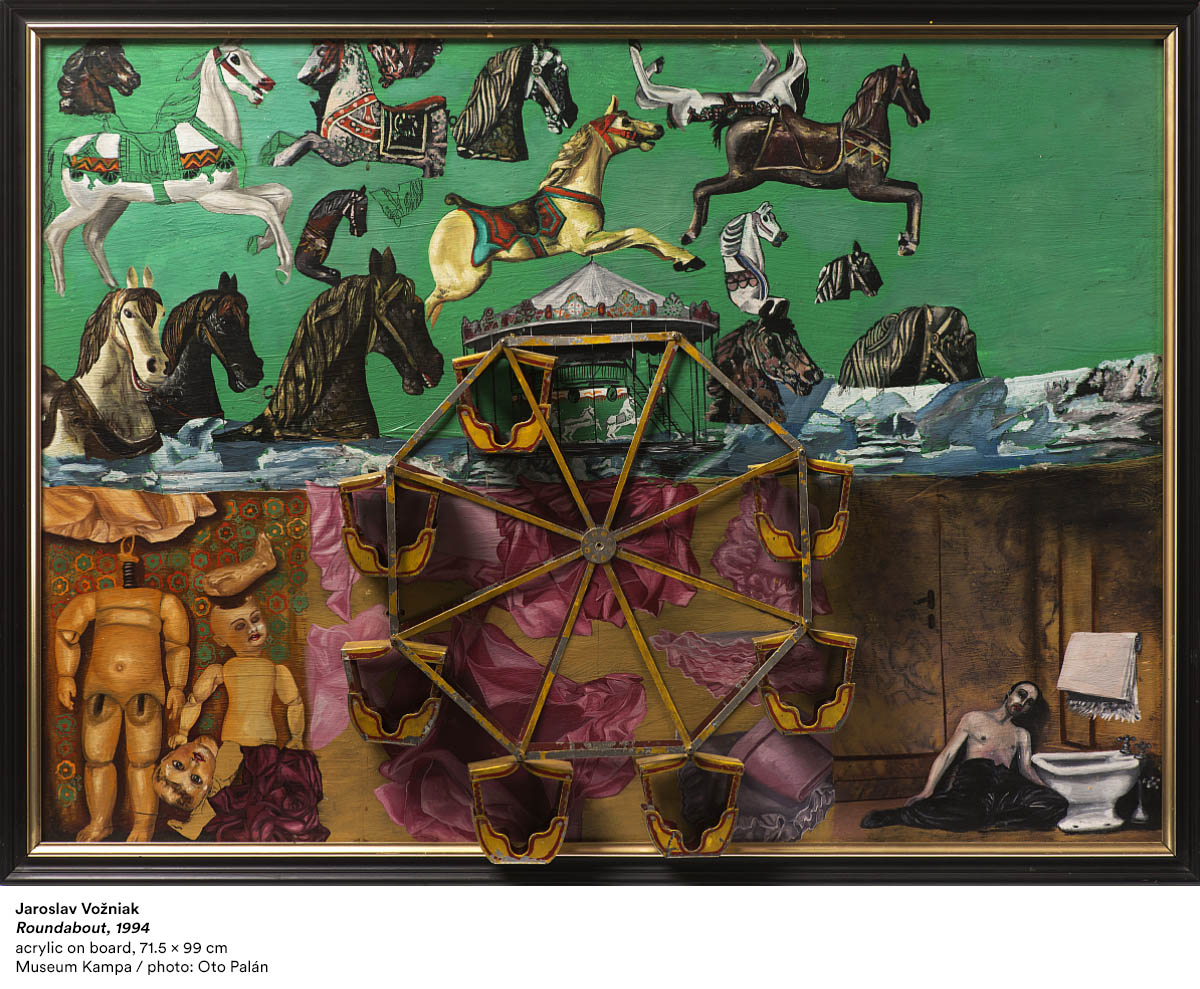 A playful mysticist and dreamer, a person who completely transformed everything around him with incredible energy and the need to permanently create – this was Jaroslav Vožniak. One of his passions was to collect curiosities, antiques, and colourful magazines as well as discarded completely useless things. He enjoyed putting them together in order to create unexpected artefacts – bust of a plaster Venus with a k.k. commander helmet decorated with a flirtatious ostrich feather and a cabaret boa. Within the framework of his art was humour and exaggeration but also, to some extent, practical jokes or manifestation of opposition to the spirit of the time as well as conventions.

He entered the art scene in the difficult era of the 1950s when, while studying at the Academy of Arts, Architecture and Design and the Academy of Fine Arts, he became acquainted with the Šmidra’s circle (Bedřich Dlouhý, Karel Nepraš, Jan Koblasa, Rudolf Komorous), a group of practical jokers the mere organisation of which was a parody of the system of the executive authorities at the time. A playful student rebellion was also a part of staged happenings such as Malmuzherciáda (1954) and Slavnostní akademie ku vzpomínce Václava Svobody Plumlovského (Ceremony in Honour of the Memory of Václav Svoboda Plumlovský) (1960) in which they followed up on the Dadaistic cabarets, full of absurd gags, poetry reading and musical compositions of particular sounds, such as water splashing in a sink and moving a chair on the floor. An articulation of disagreement and the need of free artistic expression was, in all probability intentionally, rather more evident in these disappearing Dada gestures and events than in the creative output of the participants. Jaroslav Vožniak was invited to join the group in 1955 when he was taking and active part in individual events – he designed stage clothes for the Balet v Ledenburských zahradách (Ledebur Garden Ballet) (1955) or exhibited a series of portraits at the Výstava pro jeden večer na Střeleckém ostrově (Exhibition for One Evening on Střelecký Island) (1957).

In the 1960s Vožniak applied himself to the progressive tendency of abstract art and although he soon went back to representational painting, several references are still to be found in his creative output to abstraction, especially in the 1990s. In 1964, the curator Jan Kříž organised Vožniak’s first solo exhibition in Umělecká Beseda in Prague which was an overview of his creative output up to that time – an early series based on the theme of Dante’s Divine Comedy (1958 –1959), abstract works and, above all, his red assemblages (1963 – 1965). Already clearly apparent here was Vožniak’s sense of absurd grotesqueness and of a certain kind of oddity that still continued to be present in his works. He combined found objects of no use with antiques, regardless of their original purpose or value. By putting them together he was creating an entirely new content that he adapted to his specific perception of the world. In the 1960s he created numerous assemblages that he subsequently combined with smooth illusive painting, precise Indian ink drawing or collage. He is using individual fragments or snippets of reality that he mixes to produce a bizarre, surreal scene. Simultaneously he is fascinated by the colourful world of advertisements and films the iconography of which he exploits in large Indian ink drawings and subsequently also in the Icons (1967 – 1968) series that was commissioned by and produced for the Jablonec Jewellery national enterprise. The series of thirty portraits of popular film stars wearing a luxury fashion jewellery was rather well received and was also presented within the World exhibition in Montreal, Canada, in 1969.

In the 1970s, that is at the start of the so-called normalisation, Vožniak temporarily abandoned the objects-assemblages and fully focuses on large smooth illusion painting in which he returned to the legacy of Surrealism and Romantic Symbolism. The subject matter here was the permanent presence of disintegration that devours everything, without exception – matter as well as spirit. It was a kind of personal memento mori, a testimony of a man tried by the era. Simultaneously, however, he also developed his concluding concepts of abstract art that culminate in the Balls (1987 – 2005) series and drip paintings (1989 – 2005). On several occasions towards the end of his life he returned to the tendencies he was developing in the 1960s. Yet, thanks to his unflagging enthusiasm for creative process, their quality is still clearly evident.

Jitka Svobodová: Outside and inside
Pravoslav Sovak: Landscapes of time