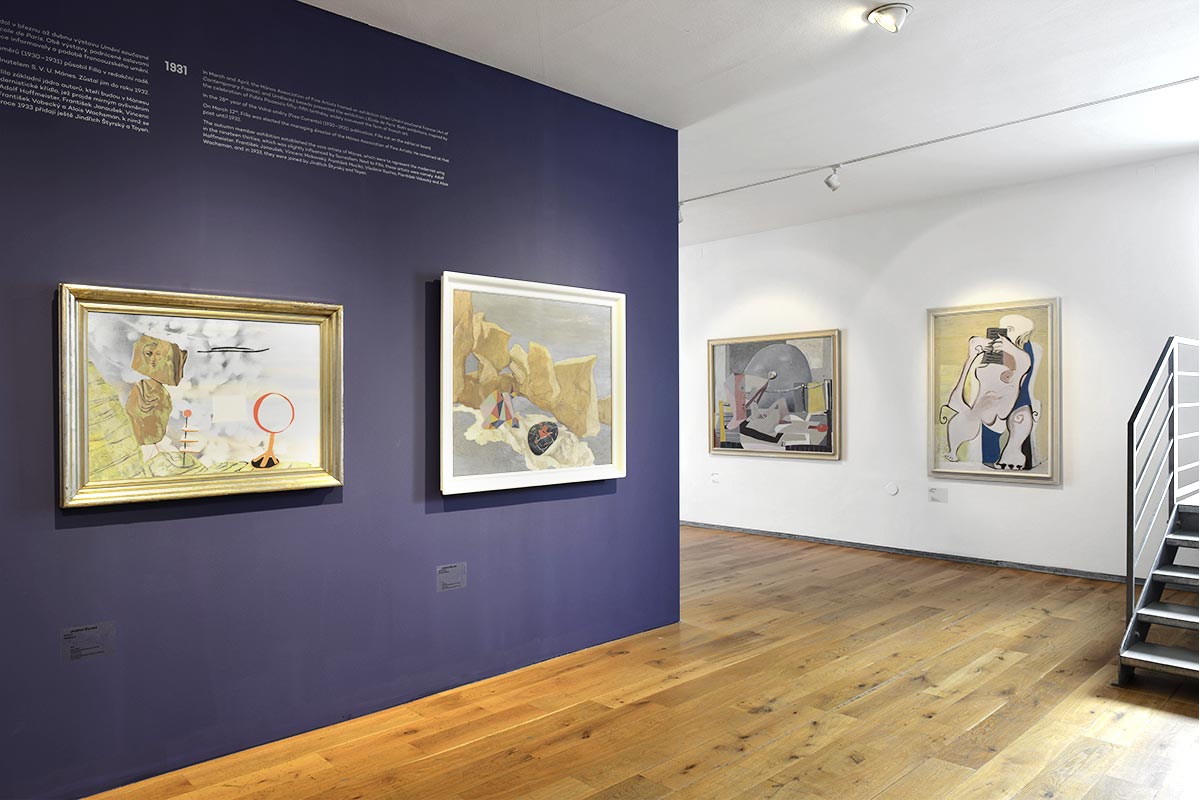 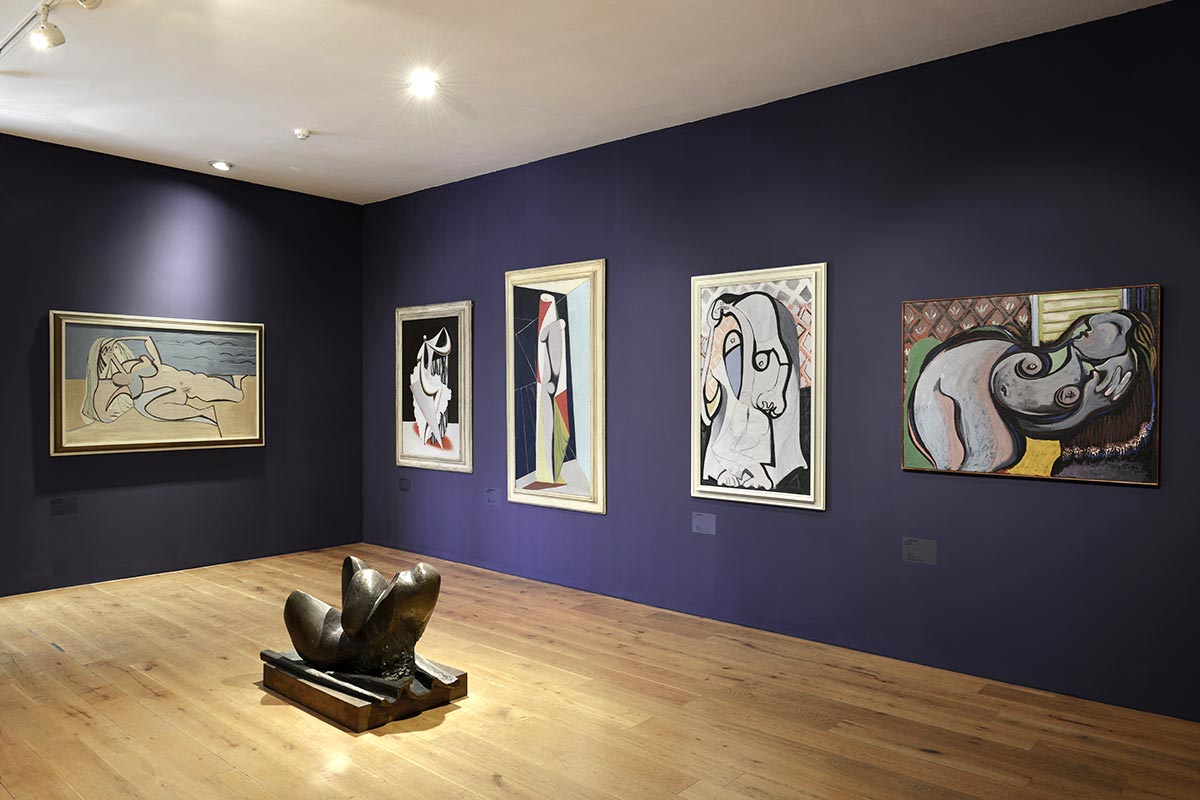 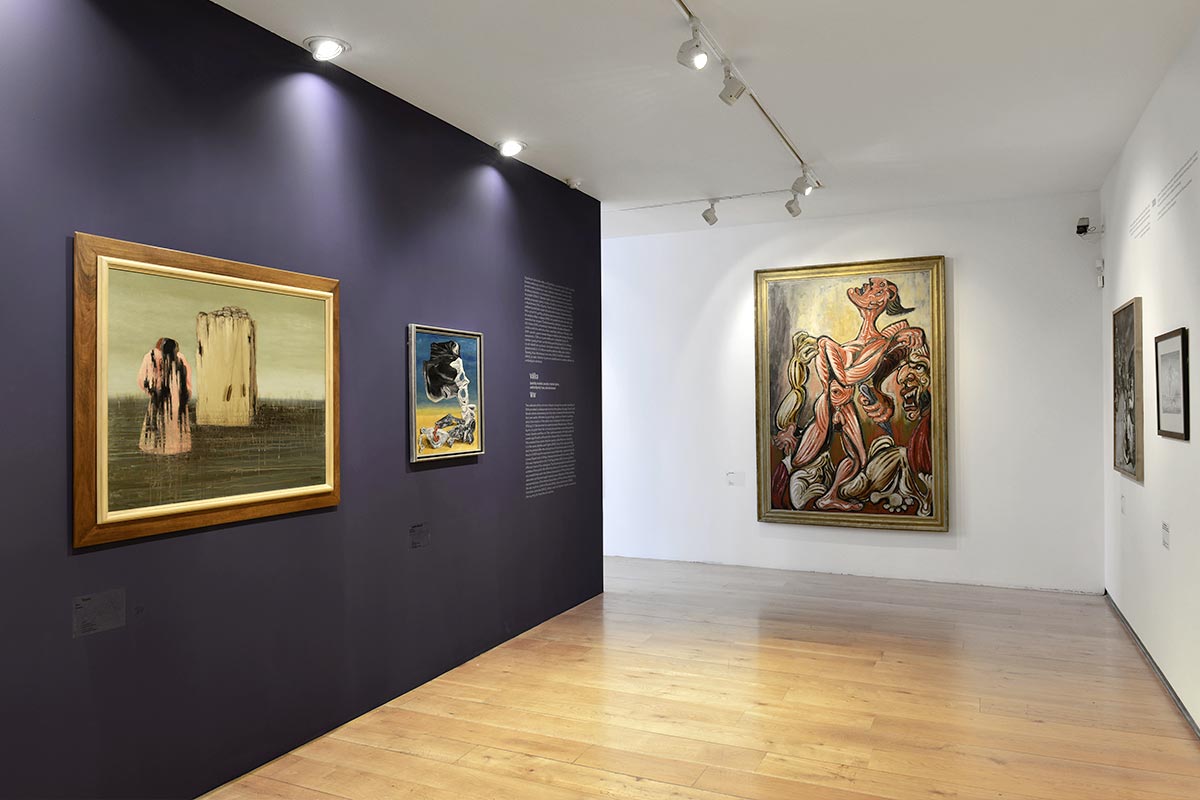 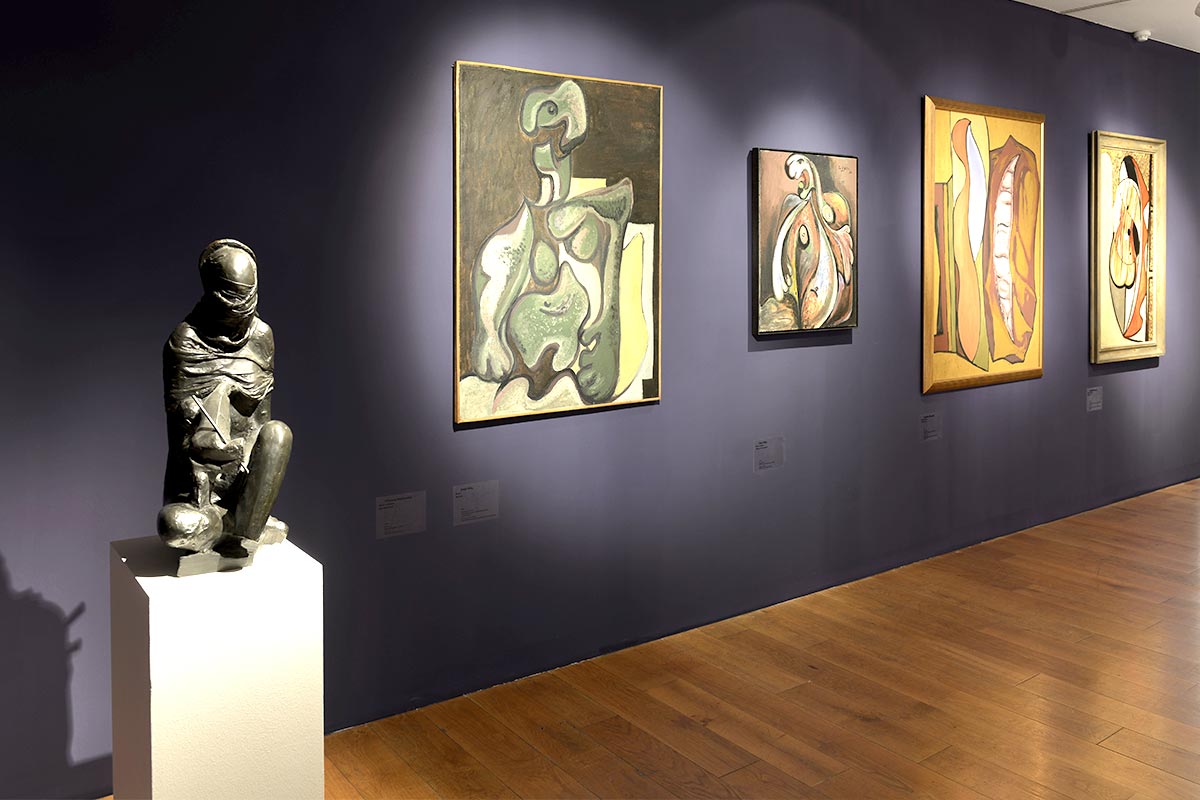 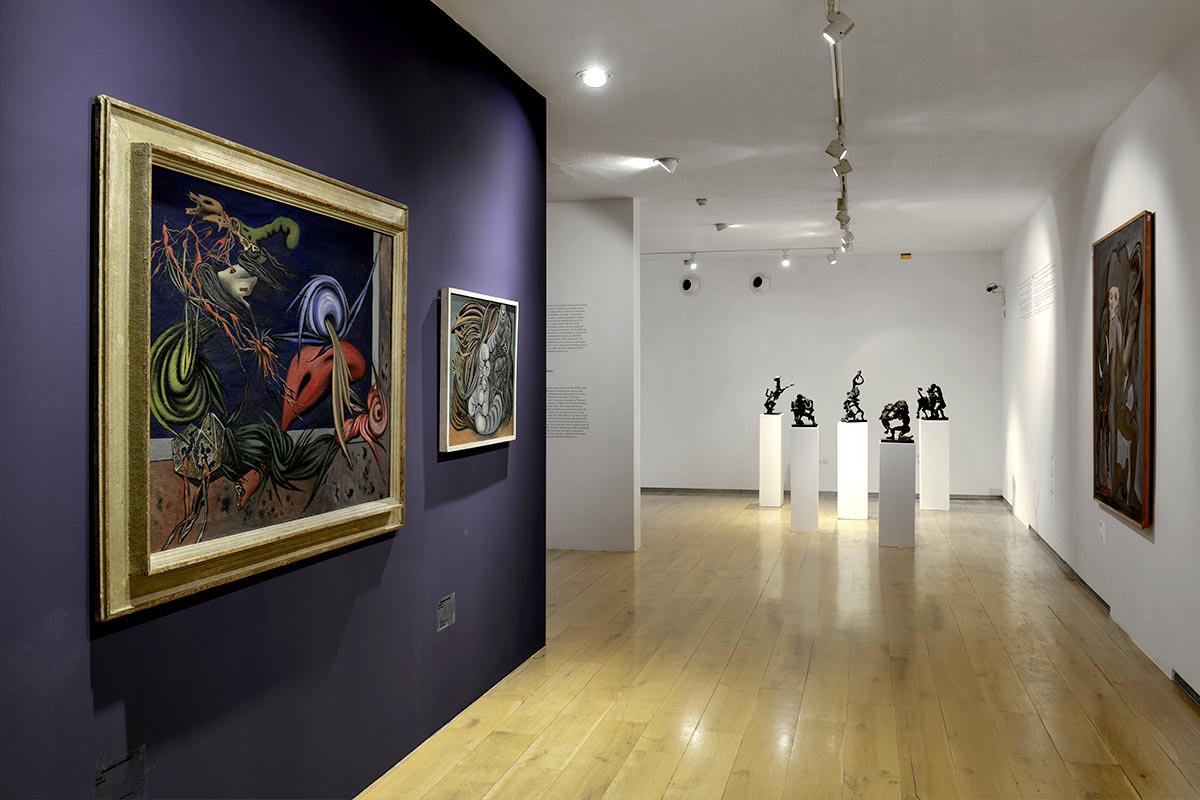 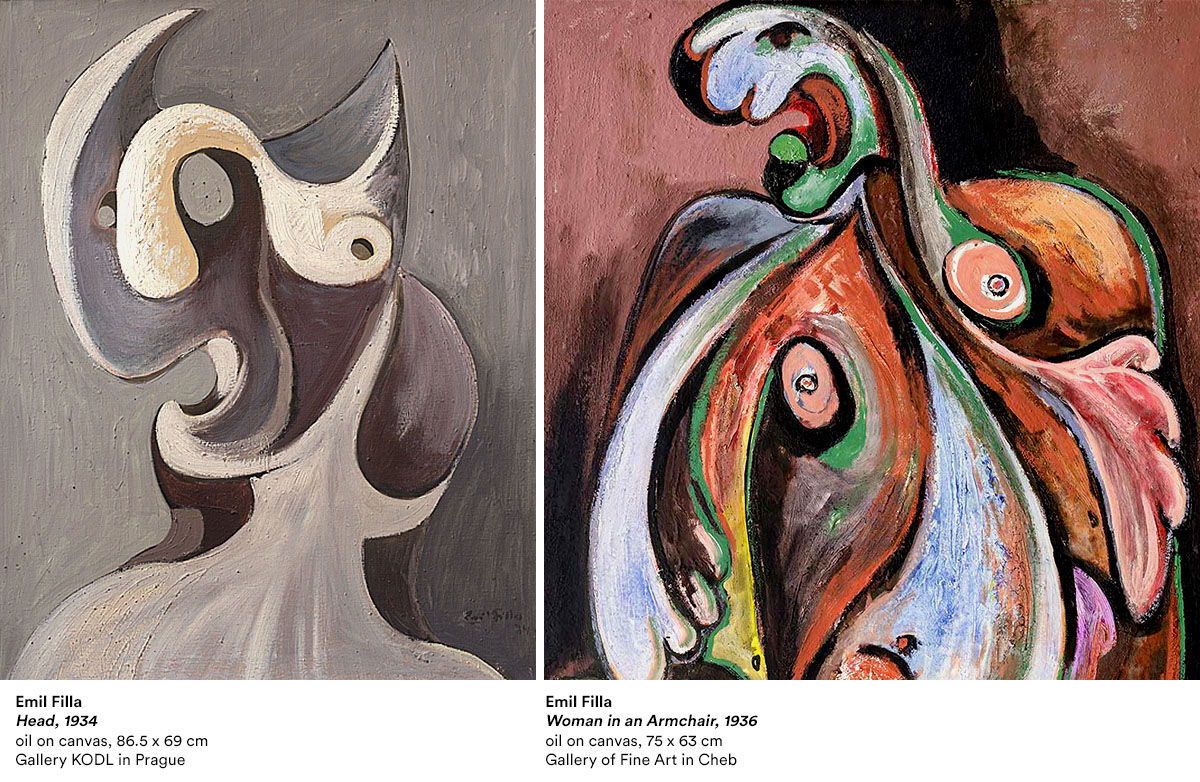 Emil Filla was decisive in establishing the acceptance of the three leading modern art movements in the Czech environment – Expressionism, Cubism and Surrealism. His relationship with the first two movements has been examined many times, yet the third remains quite unexplored. Filla made a significant contribution to Surrealism by providing the Surrealist Group in Czechoslovakia with an exhibition, publishing and organizational base with the Mánes Association of Fine Artists. Also, his work was freely inclined towards Surrealism; in the early nineteen thirties, it took a new direction, from monumental paintings of female nudes to mythological scenes inspired by Ovid’s Metamorphoses. After his retrospective in 1932, he caught a second breath and retained his leading position in the Czech graphic art scene until his arrest in the autumn of 1939. His open-minded approach to diverse artistic impulses from the broadest cultural areas affected not only his own work, but also the form of Volné směry (Free Currents) magazine, which he had the opportunity to manage for several years.

At the beginning of the nineteen thirties, Emil Filla became the only representative of the original generation of Osma (The Eight) group and the Fine Arts Group, who consistently promoted modern art and supported expressions by many artists who were a generation younger and expressed themselves differently than him. He represented a significant help to a group of young painters, sculptors, poets and theoreticians, many of whom were originally members of the Devětsil group, but since the early nineteen thirties, lacked a stronger shield of a group or organization. Thanks to him, many of those artists gained a long-term base in the Mánes Association of Fine Artists, where Filla gradually strengthened his managing position and had a significant influence over its publishing activities. Filla quickly recognized that Surrealism became a strong artistic movement and did not have to stand outside contemporary modern art, which was being defied by Surrealists, but that Surrealism can directly be its part.

The Skupina surrealistů v ČSR (Group of Czechoslovak Surrealists) was founded in 1934 and from the early nineteen thirties, Filla was friendly with its main protagonists, such as Vítězslav Nezval, Jindřich Štyrský, Toyen, Vincenc Makovský, Bohuslav Brouk, Konstantin Biebl and subsequently with Karel Teige, as well as with authors who claimed allegiance to or used elements of Surrealism, such as Alois Wachsman, František Janoušek, Vladimír Sychra or František Muzika. Thanks to Filla, the Mánes Association of Fine Artists took the Surrealist Club under its wing: Mánes hosted the club’s first exhibition in January 1935 in its main hall, and Filla provided the opportunity to include contributions in Volné směry (Free Currents) and publish works of Surrealist authors in the Mánes Association’s publications.

In return, Surrealists considered him to be their predecessor in a radical effort to promote modern art, just as the Parisian Surrealists did with Picasso. Thanks to Surrealism, Filla opened up his imagination; abandoned the residues of synthetic and lyrical Cubism, intensified and agitated his expression and moved on to an interest in Classical myths.

Neighbours in Art
Jitka Svobodová: Outside and inside