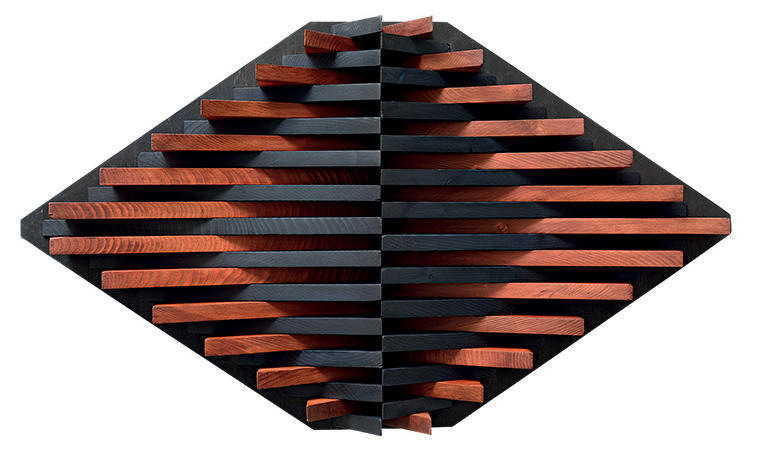 The internationally active Club of Concretists was founded in 1967 in the studio of Miroslav Vystrčil on Kampa in Prague by three artists – Radek Kratina, Jiří Hilmar and Tomáš Rajlich – and the theoretician Arsén Pohribný and included artists from all over Czechoslovakia. Apart from the bigger cities of Prague, Bratislava, Brno, Jihlava and Olomouc, Northern Moravia was an important and to a large extent quite specific region for this movement. In the second half of the 1960s, Ostrava was the place of work for Rudolf Valenta and between 1959 and 1992 for Zdeněk Kučera. Jiří Bielecky and Jaroslav Rusek worked in Havířov all their lives, and Jindřich Gola in Krnov. Eduard Ovčáček has been developing his creative program in Ostrava-Třebovice, as has Svatoslav Böhm in Krnov. It was in the studios of both of the last-named artists that the club’s stimulating meetings started in 1967. Other members, including Arsén Pohribný, visited here, discussions on the artistic direction of the group, its theoretical anchoring and the plans for club exhibitions were held here.

The North Moravian section of the Club of Concretists was specific in its frequency and importance of club meetings, but also in the character of the artwork of these members. Typical aspects were a progressive approach to usage of new artistic means and to experiments; apart from Bielecký and Ovčáček, this can be demonstrated particularly on the activities of Svatoslav Böhm (*1934). Böhm’s wooden reliefs from 1960s and early 1970s, which show strong parallels with the most progressive tendencies of neo-constructivism, are a great example of this, as are his realisations in architecture, graphic renderings of books, design concepts of book envelopes, or commercial logos, connected by the poignancy and elementariness of his artistic language.

Despite Böhm’s creative view being original in many respects, in the post-revolution period Böhm’s work was not credited with as much professional interest as it would have deserved. The question remains if the geographical situation of Krnov has played a part, given the character of the artist’s personality, who always preferred hard work to self-publicity. Maybe the fact that in 1997 Krnov was heavily affected by floods and the majority of Böhm’s works were heavily damaged or even lost, contributed to this situation. In view of the fact that Museum Kampa has succeeded in carefully restoring a number of important works by Svatoslav Böhm, this exhibition can be realised, as well as an accompanying publication featuring the artist’s work from the 1960s to the advent of normalisation. By its contextual scope and the accentuation of the artistic movements, this project follows up the previous line of exhibitions given by Museum Kampa to Jiří Bielecký, Jiří Hilmar, Radek Kratina or Františk Kyncl, thus becoming the next step in the consequently fulfilled exhibition plan of the Museum. By bringing the works of Svatoslav Böhm into the professional light of interest, as well as into the collection fund, Museum Kampa expresses not only a personal respect and consideration to the artist himself, but also a professional intent to conserve this specific example of neo-constructivist art under the auspices of a memory institution.